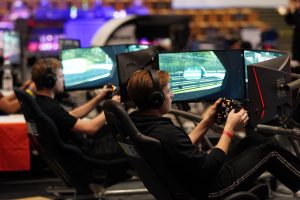 Sim Racing Lab began as an idea between colleagues at Danish engineering consultancy Dansk Ingeniør Service A/S, known in Denmark as DIS, and Internationally as CREADIS. After a few years of wishing, planning and dreaming, the decision to enter the 2019 version of GTR24h Le Mans race was made. That year the Sim Racing Lab team formed in earnest with Casper Hedegaard, Olav Langdahl, Andi Kurtsen, Jannik Wind Gotthardsen, Nik Grewy Jensen and Frederik Rosenørn Jensen. Frames needed fabrication, and with a good pile of tubes from a garden trampoline Andi, Casper and Jannik put together the nicely designed frames of the team.

Employer and sponsor DIS provided computers, screens and controls, and the seats were sourced by Olav and Casper. The pit stand was designed and built mainly by Casper, with a little welding support from Andi.

As the day of the race approached only Andi, Casper and Jannik had put in an earnest amount of training,. They were significantly more consistent and quick, so it was an easy decision that they should share car #45. Car #46 would then be driven by Nik, Olav and Frederik.

The very first race for the team was a huge experience, perhaps even a bit overwhelming. Everyone was immediately hooked – a mechanical fault on the pedals cost #45 a lot of time, almost 45 minutes, and they finished 11th. #46 were just happy they didn’t finish last in class (beat 3 cars + the non-finishers). It was an immense learning experience and with support from Line Johnsen and Mads Aaby Nielsen on the pitwall, it was all in all a success, as both cars finished, and #45 was competitive, apart from the fault on the pedals. The overarching emotion in the days following; was about the community and team spirit everyone felt, having completed and experienced the racing bug that is Endurance Esports.

Because of the huge amount of work put into setting up everything, DIS kindly handed over the ownership of Sim Racing Lab to these six passionate racers, with Frederik declining because of a move to a DIS department in the US. Sim Racing Lab is thus the love-child of passionate motorsports nerds and the great community they have together. With a great supportive name-sponsor DIS/CREADIS 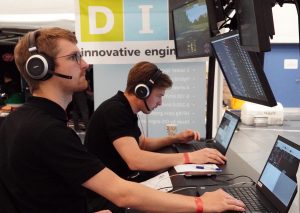 We race for the love of racing and the fabulous feeling of working together as a team. We love to do everything ourselves, and it is a rare instance, if ever, we deviate from this. Leading the first full championship season we entered, forced the team to become as professional as possible, whilst always remembering to have genuine fun along the way.

The process of professionalism and learning is important for the team, hence Sim Racing Lab, and the team now spends dedicated time testing equipment, settings, setups in every detailed aspect of eRacing. New designs of the frame, testing various brands of steering wheels and pedals, developing little helping gadgets, testing screens, computer configurations (for instance optimal cooling), pitwall and most of all, developing the winning strategy for each race based on car setup, track, weather and a multitude of other parameters. As and when we come up with new ideas and things which may benefit the racing community, we will upload them in our Lab.
We really liked it when the commentators at the 12hrs Nürbugring-GP in 2020 called us the closest possible thing to a factory eRacing team, and this is now an ambition of ours.

#46 is the “slightly slower car”, as affectionately named by the commentators at the 2020 version of 12hrs Nürbugring-GP.